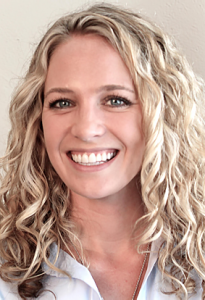 McCambridge-Karkoska is a native of Columbus, Ohio. She was a decorated high school scholar and athlete and accepted a scholarship to Purdue University. Karkoska lettered all four years on the diving team at Purdue and was a four-time All-America honoree. She was also honored twice as the Big Ten Diver of the Year. In 2004, Karkoska swept all three boards at the Big Ten Championships. She was a 2004 Olympic Trials finalist, and also had the opportunity to represent the United States at several international competitions, including the 2005 World University Games, as a member of the USA Diving National Team. She received the 2006 Big Ten medal of honor from Purdue. Karkoska earned her undergraduate degree from Purdue in 2007 in organizational leadership and supervision.

She received her master’s in exercise science at Auburn University in August of 2009. Karkoska spent 2007-2009 as a graduate assistant strength and conditioning coach at Auburn. In 2009 Karkoska was honored by the Collegiate Strength & Conditioning Coaches Association (CSCCA), winning the 2009 John Stucky Award. The award is given in honor of Coach John Stucky and recipients are chosen based on characteristics and skills that they’ve shown throughout their work in the strength and conditioning profession.

Karkoska then transitioned into an assistant coach to the Auburn swimming and diving program, where she helped the program achieve their 13th, 14th, and 15th SEC Championships.

In 2013 she moved into the private sector and accepted the position as Fitness Director at Moore’s Mill Club in Auburn, AL where she continues to work today. She teaches a variety of classes, personal training, and runs the fitness, aquatics and other wellness based programs.

In 2016 she was inducted into Purdue’s Intercollegiate Athletic Hall of Fame.

She is married to Auburn University strength and conditioning coach Bryan Karkoska, has a three year old daughter and resides in Auburn, AL.