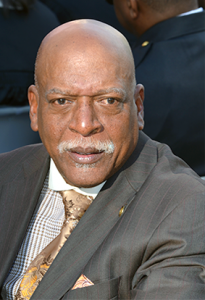 Rodger Smitherman was first elected to the Alabama Senate in 1994 pledging to improve education in the state, support programs for senior citizens and work with others to break the gridlock in Montgomery. The five-term Senator has consistently introduced and supported legislation to make good on his pledge and is committed to continuous and dedicated service in his sixth term as the Senator for District 18.

Smitherman was born in Montgomery on March 2, 1953 and spent most of his formative years in rural Shelby County, Alabama. He received his undergraduate degree from the University of Montevallo, and years later was appointed to that institution’s board of trustees. A seasoned litigator, Smitherman is a graduate of the Miles College School of Law. He and his wife, Judge Carole C. Smitherman, have served as professors in the Miles College School of Law, preparing the next generation of barristers for courtrooms and corporate boardrooms.

Smitherman has enjoyed success in his 20 years in the Alabama Legislature, and that success has been beneficial for the residents of District 18. He served for two years as president pro tempore of the Senate – the most powerful position in that house. He has also held key positions of authority on committees such as Finance and Taxation, Education and Judiciary. He has introduced, supported and passed bills to create jobs in the state, provide more funds for local initiatives, protect senior citizens and improve public K-12 schools and universities.

Smitherman has been a constant presence in throughout District 18 as a leader, supporter of education and a coach in youth sports. He is regularly on the sidelines at Ramsay High School helping to groom young basketball players, and he has organized teams in the AAU (Amateur Athletic Union) leagues in Alabama for many years. He has also mentored legions of young golfers and is a major supporter of First Tee and LPGA girls golf, programs that introduce young golfers to the game and encourage their development. He is also a humble Christian servant and an elder at More Than Conquerors Faith Church.

Smitherman and his wife, Judge Carole C. Smitherman, make their home in South Titusville in the heart of the district. They have four children; Rodger Smitherman, Tonya Smitherman Herndon, Mary Smitherman and Crystal Smitherman. They also have six grandchildren: Justin, Jaden, Leah, Tony, Naomi and Noah.